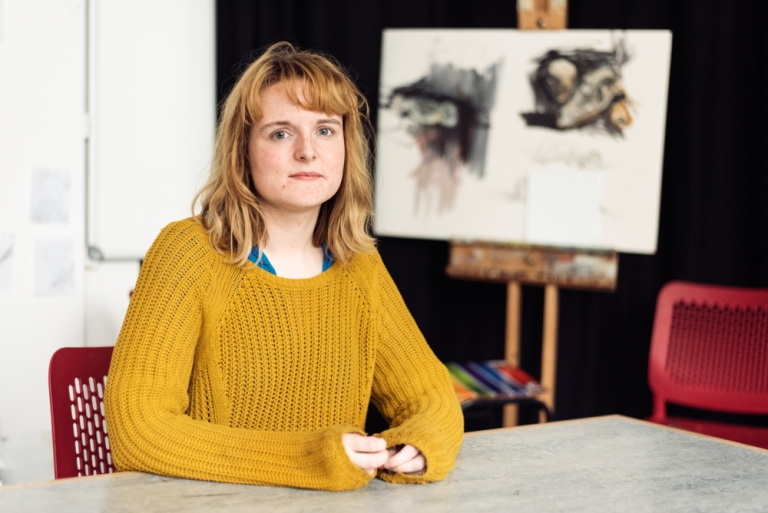 Why did you choose this place for your picture?

All full-time students here in my course are women. I think it’s a really good nurturing environment, we’re very supportive of each other, always trying to help each other out to grow as artists. So I chose this room because of its female presence. I think that if there were a guy here as well, it would just change the dynamic a little bit. Male artists tend to be more confident. Regardless of whether they are better artists or not, they do have inherently more confidence. I think that it potentially could affect the whole dynamic of the class. I don’t know if that’s kind of reverse sexism, it probably is.

What is your personal understanding of feminism?

It’s gender equality. It’s a really loaded term, but I think it used to be worse. When I was growing up, there was this Girl Power in the 90s. But the 90s feminism was like a subculture kind of thing. A lot of people frowned upon it. I think the Internet has been really, really good for that, now it’s become more normalized and more acceptable for men to be feminists as well. And it’s kind of weird if you’re not a feminist now, because all you’re asking for is equality.

How do you express your feminism?

Being Irish at the moment it’s a lot about what’s going on in Ireland. Abortion is still illegal there and it makes me really angry that these men in the lead positions are controlling millions of women’s bodies. So I express my feminism through art, it has been coming out a little bit recently, I’ve made some political stuff about that law. Me and the other students in my class went to the “Repeal the Eighth” March in Cambridge, which was for the Abortion Rights Campaign in Ireland. It was a good experience, there were about a hundred people there. What I liked about that was that it wasn’t just Irish women, there were Scottish and English people and others as well. It was a nice solidarity; I appreciated that. Women support each other, it was cool. I do my bit while I’m here, I probably could be doing more if I was based in Ireland. If I ever have any ideas for drawings, I execute them and I put them up on Social Media. And I’m definitely campaigning in digital ways like signing petitions.
If a man is talking to me differently, or mansplaining, I try to cut it off. I used to not notice these things, but I do now. There was this guy the other night who made horrible sexually harassing comments and I was so pissed off! How dare he speak to me like that, he was just dehumanizing me! I feel so angry at him. He wouldn’t speak to a man like that! 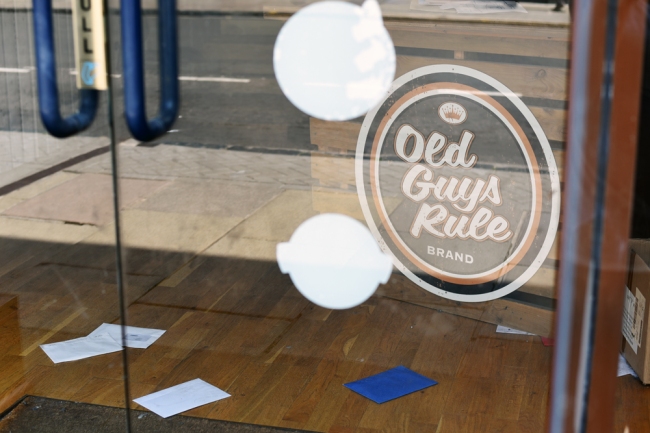 When did you first consciously feel like or defined as a feminist? Was there a reason for it?

I think it was in Japan in 2014. I got really pissed off by some of the Western men that live there. Some men I encountered had this notion about Japanese women being submissive because of western stereotyping or pornography.
I think I always have felt like a feminist, but again, back then there was a societal stigma against feminism. The Internet has been really good in that way, because there were things that had been pointed out to me from that, mansplaining for instance. When I first learned that, I was like: “Oh my God, I feel like that all the time”! And I never really took notice of it until then, but so many men have done it all the time through my life. And manspreading is the other one, when you’re on a bus or a train and a guy occupies the space when sitting down and he intrudes in your space too. That’s just a physical embodiment of saying that you think you’re more important than me.

Do you feel equal in your everyday life?

I can’t think of anything in a daily circumstance regarding the outside world. If there is something it’s usually some incident like that guy the other night, and that was just fucked up. It made me really think about the hierarchy of a man buying you a drink. It’s something I never thought about before, but that guy kept going on about it, and it’s made me step back. That’s like buying you a little bit, it’s a weird exchange. I don’t think I will accept it anymore. But in general I haven’t experienced it so much in Cambridge. Daily it’s pretty equal.

How do you perceive the reputation of feminism in the UK?

It’s definitely gotten more positive, I think it’s growing. I think the Internet has a lot to do with that, there’s definitely growing movement of it. But there are still negative connotations like “women are so angry and you’ve naught to be angry about”. Chimamanda Ngozi, the African writer, came out with a statement a few weeks ago, she said she felt like being a woman holds her back a lot more than being black. And she feels far more frustrated about the state of women’s rights than the rights of black people. Because it’s still brushed under the table when she says something about being a woman, they’re far more dismissive of it. But it’s one of the weird things about Trump getting elected, that there is now more solidarity in certain parts. The people who were milder about feminism have now gotten stronger. I feel certainly far more angry and stronger in my beliefs since he’s been elected.

This site uses Akismet to reduce spam. Learn how your comment data is processed.